Self-taught, Nino Migliori began making photographs in 1948, documenting his familiar and beloved Italy as it emerged from the second world war. The artist traveled throughout his homeland, from the impoverished south to the more affluent and industrial northern regions, capturing the people with the affection and empathy of an equal.

A prominent figure in the neorealist school of photography, Migliori produced a rich and significant body of work in post-WWII Italy. The country was engaged in throwing off the repressive shackles of a fascist regime, an idealistic pursuit not lost on its photographic community. Migliori and his fellow documentarians pledged to expose the human condition and all its foibles, replacing romanticism with wit and humanity. Traveling to the southern regions to expose the pride of its people and the prejudice under which they toiled symbolized a rite of passage for Migliori and for other photographers of the postwar generation. Migliori also documented a traditional way of life in the North that would soon be transformed by modernization. The charming old-world ambience of its towns and the marvelous characters strolling its streets are a fascinating study of a culture on the precipice of change.

Some of his most intriguing photographs were conceived as sequences presenting a narrative from beginning to end.  A series of four images titled Le mani parlano (The hands speak) 1956 depicts a trio of Italian women embroiled in discourse—a remarkable study of facial expressions and hand gestures that need no textual explanation. In another endearing series, I ragazzi della via (Boys of the street) 1955, a gang of six boys engaged in mock battle, armed with peashooters, dart across the frame.

The artist’s most recognizable photograph, Il Tuffatore (The Diver) 1951 shows two brothers on a Rimini dock, one jumping over the other into the sea. Migliori captured the moment in which the diver is parallel to the horizon, suspended in mid-air above his brother. Viewers often ask if the image has been manipulated, but it was simply perfectly timed.

Migliori’s photographs also include dramatic cityscapes with bird’s-eye views of Bologna, architectural abstractions of Milan, and glimpses of ad-plastered canals in Venice. These high-contrast scenes reveal striking patterns, textures, and other details of these busy cities.

Migliori’s spontaneous visual records of wonderful little moments captured in the everyday lives of the Italian populace lasted less than a decade, but yet survive as his most powerful vision. 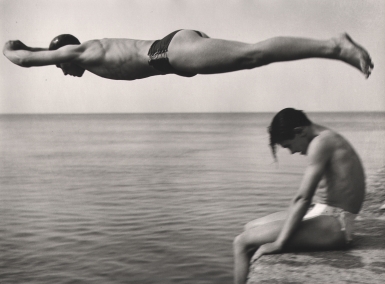 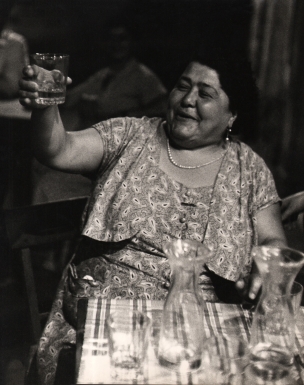